One of Houston's first female police officers, Bonnylee Montero, died Sept. 8, 2017. The 86-year-old left behind a legacy of police work that has inspired women to follow in her footsteps. Her retirement benefits ensured she continued to receive an income after spending decades with the Houston Police Department.

Other than its number, Houston police officer Elizabeth Woodall's badge doesn't look much different from the badge belonging to other officers. The words "Houston Police" can be seen on the shield. It is shiny and free of fingerprints. The badge, No. 1968, is far from ordinary, though. It belonged to Woodall's grandmother, Bonnylee Montero, one of Houston's first female police officers.

On Sept. 8, 2017, the 86-year-old pioneer of Houston's female police force died. She had Lew Body Dementia, a progressive brain disorder.

More than 60 active and retired police officers attended her funeral Sept. 16 at St. Matthias Catholic Church in Magnolia, Texas, a rural community northwest of Houston. She is survived by her husband, children and grandchildren. But she also leaves behind a legacy of police work that has inspired the women in her family to follow in her footsteps.

Three of her four children went into police work, including two daughters who are both retired from HPD. Then, there is her granddaughter, Woodall, who wear's Bonnylee's badge.

“I really didn't talk to her about how her accomplishments inspired me,” says Woodall, who graduated from the Houston Police Academy in 2015 and wears her grandmother's badge. “We are strong women and just go after what we want. She certainly had that influence on me.”

To her family, Bonnylee was a funny and loving artist, woodcarver, and award-winning dessert maker. She participated in rattlesnake roundups and tanned rattlesnake skins to make belts and hatbands. She loved the outdoors and horses. History, however, recognizes for her taking on a male-dominated job.

Montero spent 35 years with the Houston Police Department. She joined HPD in 1953 when women were not allowed to enter the Houston Police Academy, becoming one of three female officers who were the first to serve on the police force.

“She was working as a clerk for Houston's municipal court system,” says her husband, James Montero. “The police chief saw how dedicated and organized she was and asked if she'd like to join the police department. She asked what the pay would be. It was more than she was making as a clerk, so she said yes.”

Because women were not allowed to attend the police academy, Bonnylee was on her own. She studied law books before taking an exam to enter the police force. She passed the test and was sworn in on Nov. 1, 1953.

Bonnylee's gumption to join the police force may have been uncommon at the time, but that spirited initiative was ingrained in her personality. Bonnylee was born in October 1930 in Duluth, Minnesota. She grew up in Aitken, a small community where her father worked as a bread distributor, according to a 2015 profile written by Nelson Zoch for Badge and Gun, the Houston Police Officers' Union membership publication. She and her sister sometimes got up before school to help their father deliver bread. In high school, Bonnylee was a drum majorette in the band and played for the high school's girls' basketball team.

She graduated high school at 17 years old, and soon after Bonnylee went to live with her grandmother in Houston. It was a spur-of-the-moment decision, according to Zoch's article. Shortly after arriving, she applied for a job with the city, working in the municipal court's ticket division. While working at the cashier's window collecting fines, she reorganized the city's parking ticket filing system. After five years on the job, her organizational skills gained the attention of police department officials. Whether she intended to or not, Bonnylee would pave the way for women who have since joined HPD and climbed its law enforcement ranks.

During her career, Bonnylee worked in HPD's crime prevention, juvenile, crime analysis, vice, community services and the homicide divisions. In 1980, she was named Officer of the Year in the Investigations Category by the 100 Club of Houston for her work in the vice division. In most of her assignments, her job was to set up crime analysis programs to more easily identify and track repeat offenders.

“She was good at finding connections,” her husband, James says. “She was able to talk to anyone and had a way of getting information out of suspects.”

In an August 1983 article published in Crime Stoppers' newsletter, The Informant, Bonnylee's work was attributed to solving more than 870 cases. She went on to solve many more. In the article, Bonnylee says everyone's call is important because they are willing to give information.

She says witnesses to a crime wouldn't talk to police at the scene, but they couldn't wait to call Crime Stoppers. The Houston Crime Stoppers program was considered one of the nation's most successful citizen programs against crime, according to an undated Associated Press article in which Bonnylee was interviewed. In the article, she says drug dealers report other pushers to reduce competition.


“When homicide detectives go to a crime scene they pass out Crime Stoppers cards,” the AP story quotes Bonnylee. “Then they leave. Not 10 minutes later, the phone starts ringing here.”

Her experience with HPD's Crime Analysis division helped her set up the program with Crime Stoppers of Houston. The program caught the eye of officials with Scotland Yard, the law enforcement agency that polices most of London.

“Scotland Yard sent someone to Houston to learn the system she created,” Bonnylee's husband, James, says.

He has a collection of newspaper clippings and other documents highlighting his wife's career. He met Bonnylee while working on the police force. James, now 81 years old, is a retired HPD sergeant. The couple was married for 46 years. James also is a former trustee of the Houston Police Officers' Pension System. He says although having the secure retirement income of the public pension was essential to Bonnylee, it wasn't the reason she stuck with the job for so many years.

“She liked serving the community,” he says. “She was passionate about her job.”

The Monteros retired the same year but pension benefits were not enough to sustain their retirement. James opened an investigations company and Bonnylee sometimes helped out.

Before meeting James, Bonnylee was raising four children from a previous marriage. She was the first female police officer to have a baby while working for the department. Bonnylee was divorced, and James was ending a marriage. The two clicked.

On Jan. 5, Gov. Greg Abbott presented James with a flag flown above the state capitol in memory of Bonnylee and her pioneering work in law enforcement. Bonnylee's granddaughter, Woodall, however, has something she considers a bit more special – her grandmother's law enforcement badge. Every time Woodall puts on her HPD uniform and heads out to protect the peace of Houston's citizens, the badge is a reminder of the courage her grandmother had to take on a sometimes dangerous job for which women at one time were not even allowed to be trained. 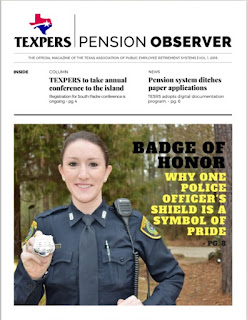 This article originally appeared in the Vol. 1, 2018 edition of TEXPERS Pension Observer, a membership magazine of the Texas Association of Public Employee Retirement Systems.