By Allen Jones, TEXPERS Communications Manager
Elections were conducted for the 11-member board of directors of the Texas Association of Public Employee Retirement Systems on April 15 during the organization's annual conference on South Padre Island.
TEXPERS board members also use the yearly conference to elect officers from their peers.
Jim Smith, of the San Antonio Fire and Police Fund, is serving as first vice president. TEXPERS bylaws require the second vice president to preside over board meetings when the president is absent. Smith has served in Police Position No. 8 since 2014 and also was re-elected to the position by his caucus during the conference.

His isn't the only position that can fill in for an absent president. Dallas Employees' Retirement Fund's John Jenkins now serves as second vice president. The position serves a similar function as the first vice president. Jenkins would be called to supervise any board meetings missed by the president and first vice president. He moves into the position after having served as the board's secretary. He has served in Municipal Position No. 1 on the board since he was first elected by his caucus to take over an unexpired term in 2011.

Sherry Mose, of the Houston Municipal Employees Pension System, is now TEXPERS' board secretary. She previously served as the board's first vice president. As secretary, Mose is to prepare board meeting agendas and make them available to all TEXPERS member systems at least 72 hours before meetings. The director position also makes Mose responsible for taking minutes for all board meetings. As board secretary, she is also to confirm delegates and nominees. Mose has served three four-year terms on the board since being first elected by her caucus in 2008.
Eyna Canales-Zarate, of the City of Austin Employee Retirement System, is the board's treasurer, a position she previously held. As treasurer, she oversees the collection of member system dues and other funds belonging to the association. The post also manages TEXPERS funds and makes disbursements under the authorization of the board, according to the association's bylaws. Treasurers also maintain financial records and reports on financial transactions. She has served in Municipal Position No. 11 since elected to her first term in 2006.

The board has a new member, Larry Knott of the Dallas Area Rapid Transit Employees Defined Benefit Retirement Plan and Trust. During the conference, he was elected by his caucus to serve Authority/District Position No. 9 on the TEXPERS board of directors. He takes over the position formerly held by board member Jose Cavazos, who is a member of the Dallas Area Rapid Transit Retirement Plan and Trust. Cavazos was re-elected by his caucus to serve on the TEXPERS board of directors but this time taking over Authority/District Position No. 10. Michael Curran previously held the position.
Caucuses elect board directors, who serve four-year terms. All member systems' delegates are eligible to serve on the board. According to the association's bylaws, the board is to include three municipal system members, three fire system members, three police system members, and two authority district members. 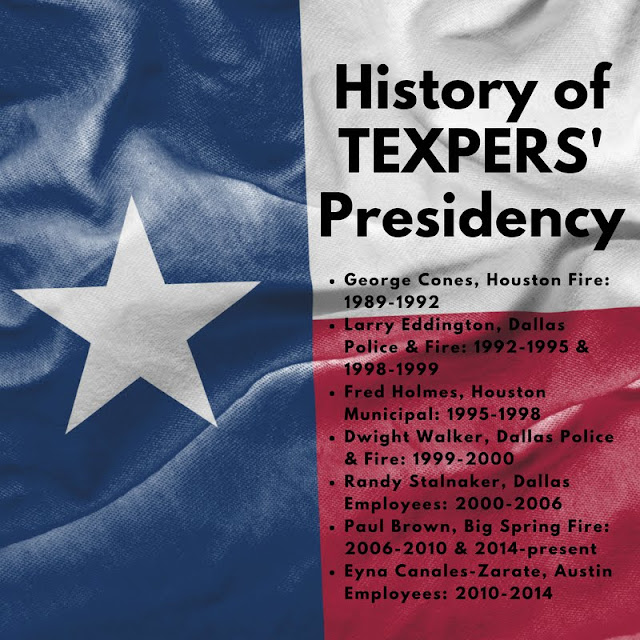 To learn more about TEXPERS' board, including biographies, visit www.texpers.org and click the “About TEXPERS” tab.