TEXPERS and many other retirement systems have written U.S. congressmen opposing a proposed bill that would establish a dangerous precedent concerning unfunded federal mandates, taxation of municipal bonds, and intrusion into the operations of state and local governments. 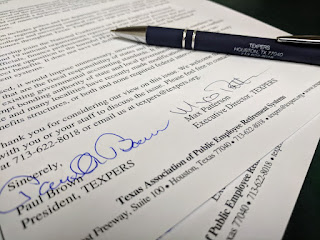 Rep. Devin Nunes, R-California, recently introduced the Public Employee Pension Transparency Act (House Bill 6290), which calls for an amendment to the Internal Revenue Code of 1986 for reporting and disclosure by state and local public employee retirement pension plans. Nunes introduced the bill, known as PEPTA, June 28. It is to be considered by the Committee on Ways and Means, the chief tax-writing committee of the U.S. House of Representatives, before it is possibly sent on to the House for voting.

TEXPERS' executive director, Max Patterson, and the association's president, Paul Brown, expressed their opposition to the proposed act in joint letters sent to House Speaker Paul Ryan (R-Wisconsin) as well as to Ways and Means Committee Chairman Kevin Brady (R-Texas) and the committee's ranking member, Rep. Richard Neal (D-Massachusetts).
"If passed, [PEPTA] would impose unnecessary, unwanted and unfunded federal mandates in areas that are the fiscal responsibility of states and localities,” according to the joint letter written by Patterson and Brown.

"Consider the fact that every state and many localities have recently made modifications to pension financing, benefits structures, or both and none required federal intervention," write Patterson and Brown.

Click here for the full copy of the letter TEXPERS submitted to Texas representative Brady.
This isn't the first time Nunes has introduced PEPTA. The representative first introduced the legislation in 2010. This time around, though, the act has three co-sponsors, which is the lowest number since it was first introduced, according to the National Association of State Retirement Administrators.
In a newsletter, NASRA indicates that 20 national organizations sent letters of opposition to all members of the U.S. House of Representatives.

"As there are a number of federal legislative vehicles under development that could include retirement provisions, including multiemployer plan solvency legislation and a Tax Reform 2.0 bill, systems are encouraged to continue congressional outreach and weigh in if they have not already done so," according to a statement issued by NASRA in the newsletter.
The National Conference on Public Employee Retirement Systems is among the 20 organizations opposing the proposed act. TEXPERS also encourages its membership systems to write to delegates in the U.S. House of Representatives opposing PEPTA.
Send letters to Rep. Kevin Brady staffers Aharon Friedman, Aharon.Friedman@mail.house.gov, David Davis, David.Davis@mail.house.gov, and Barbara Angus, Barbara.Angus@mail.house.gov.
For Rep. Richard Neal, email your letter to Kara Getz at Kara.Getz@mail.house.gov. For House Speaker Paul Ryan, email your letter to George Callas at George.Callas@mail.house.gov.

Also, a listing of staffers for all other Texas U.S. House members is located here on TEXPERS' website. In addition, consider contacting your local House representative. You can look up your representative here.