Leadership Tips from a Chili Queen

Chili is a dish frequently used in cook-offs, and although many people debate over the best version of it, cooking the dish is a lot like leading a pension system, says Diana Anderson, a modern-day chili queen who co-owns JD's Chili Parlor with her husband John in San Antonio. 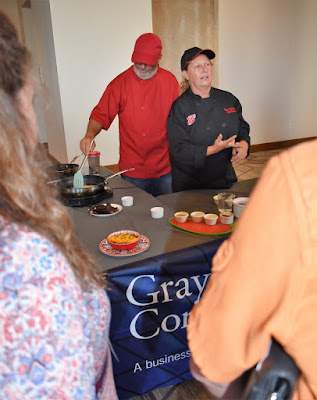 Anderson hosted a cooking demo Aug. 13 during TEXPERS' 2018 Summer Educational Forum in San Antonio - the city many chili aficionados believe chili first took root in the U.S. The theme of this year's Summer Educational Forum was Texas Pension Chili: a Recipe for Returns and was held Aug. 12-14. Anderson provided a unique perspective linking chili cooking to leadership.
Anderson's popular catering company often sets up tents to cook and serve a variety of chili dishes at various farmers markets and other venues. She also conducts chili cooking demonstrations and has come to know a lot about the spicy dish's history.
"Much like running a pension, cooking chili takes commitment, inspiration and the ability to adapt to produce successful results," Anderson says.
Chili con carne, or what most Americans shorten to chili, is named for its base ingredients of chili peppers and meat – usually beef. The dish originated in northern Mexico and Texas.
Many chili aficionados trace the dish's roots to San Antonio. Some 200 years ago, women known as “chili queens” would take their cooking pots to the plazas of San Antonio where they would cook their spicy stews over open fires. Their dishes often included tomatoes and beans, but not always. Seasonings may have included garlic, onions, and cumin, Anderson says.
Setting up crude tables and stools, women would turn the plaza into makeshift restaurants, or chili parlors. Soldiers, tourists, cattlemen, and musicians often were patrons of the parlors, paying 10 cents for a bowl of chili. In the 1920s, chili parlors would spread across the U.S. making the dish and its various incarnations a favorite staple of American comfort food.
Today, there are a variety of chili dishes. There is vegetarian chili; chili made with green chili peppers, called Chili Verde; pork-based chili, white chicken chili, and black bean chili, to name a few. Tastes even differ geographically over the types of meat and ingredients, such as Rocky Mountain Chili that often includes ground elk or other local game as its main meat stewed with chipotles, chocolate, and coffee. TEXPERS' firefighter friends may enjoy Five Alarm Chili, which uses five different types of peppers in the recipe to pile on the heat.
It seems everyone has their favorite chili dish. Cooking it can be a very personal thing, Anderson says. She considers herself a student of chili's past and is currently helping research chili's roots in the U.S. for a documentary film.
She traces the dish to a stew-like fare once cooked outdoors on Canary Island. The recipe included garlic, chili peppers, wild onions and cumin spice blend resembling the Berber seasoning style of Morocco, she says.
Anderson says there are several ways cooking chili relates to leadership. A good chili takes time to create, often simmering all day, so it is just right to ladle into bowls. Cooks must have a passion for what they are creating. And, they must be willing to experiment with flavors and spices.

Like a chili chef, pension trustees and administrators need fortitude, Anderson says. Failing to cook chili for the appropriate amount of time will have lackluster results that disappoint taste buds. Likewise, a pension fund's trustees and administrators must understand that today's fiduciary decisions will have profound, long-term impacts on members, retirees, beneficiaries, plan sponsors, taxpayers and the general public.
Pension system leaders, Anderson says, that are distracted from their primary purpose of meeting retirement benefit obligations could gain unwanted public criticism. Fund officials must hold ethics to high standards.

Cooking chili also takes passion. A good chili cook wants to learn all they can about prepping food, selecting fresh ingredients, and combining flavors that please family, friends, or customers. Anderson says leaders of public employee pension systems must have the hunger to ensure their active members receive a secure income when they retire.
A leader with true passion will want to understand rules and regulations to which pension systems must adhere. A passionate leader will want to learn about the challenges of a rapidly changing and complex policy and investment environment.
Passionate leaders get excited about sifting through large volumes of data to glean insights to become better fiduciaries. They also enjoy advocating on behalf of their members when challenged by public officials and others looking to dismantle defined-benefit plans. And, importantly, they want to take part in continuing education to be the best leaders they can become.

No chili dish is alike, and neither are pension systems. Chili recipes may have some common ingredients but there may be different people making the dish with individual ideas of what flavors work together best, Anderson says. Chili cooks have different skill levels. A chef may have to tweak a recipe to account for dietary restrictions. A region may have preferred meat such as venison or chicken instead of traditional beef. Some chili eaters may not want a meat of any kind in their chili.  Likewise, each pension system is one of a kind. Officials face common challenges, but one fund's best practices may not be the most effective for another. Every system is at a different stage of development and operates in a separate legislative, socio-political and economic environment. Each fund has different board members with varying levels of expertise and degrees of confidence in their staff and consultants. Fund leaders have different decision-making styles, access to various resources, and may deal with different authorities. Pension funds have different types of investments and may have a large membership or very few.
Not everyone is called to be an expert in chili making or in running a public pension plan. Everyone, however, should be willing to develop their skill sets to do the best job they possibly can. Take a cue from chili queens of past and present: be passionate about the work you have committed to do and be willing to find the right ingredients uniquely suited to your fund.