“… always believe, act and execute as if you are part of something much bigger than yourself.” That was the message retired U.S. Navy Lt. Comm. John J. Parma left with members of the Texas Association of Public Employee Retirement Systems during a keynote luncheon presentation April 8 during the group's 2019 Annual Conference in Austin. 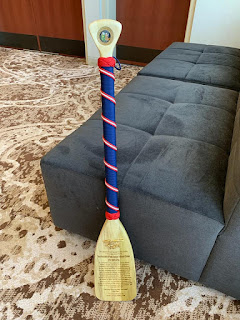 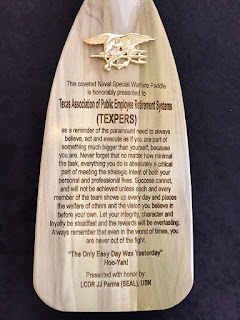 During his keynote presentation, the former Navy Seal discussed how “elite teams” are formed. The nationally-known motivational speaker also presented TEXPERS' president with a commemorative paddle featuring a motivational message with the words above included in an inscription on the blade. The paddle is modeled off the coveted Naval Special Warfare Paddle and was welcome encouragement for the association, which is celebrating three decades of work expanding awareness of public pension issues as well as training trustees and administrators of retirement systems throughout Texas.

“Thank you to everyone that was able to attend the 2019 Annual Conference,” says Barbara Zlatnik, TEXPERS' associate director for programs and training.  “We are grateful to those retirement system trustees and staff that made time to be with us and celebrate the TEXPERS 30th anniversary. I am especially grateful to our sponsors for their support and for their subject matter experts that spoke. TEXPERS board and staff have been gratified by the positive feedback that we have already heard.”

TEXPERS hosts the Annual Conference each spring offering workshops designed around current topics and trends in the public pension industry. Time also is scheduled for the association to convene its annual members business meeting, gather its delegates, and to assemble TEXPERS' board of directors.

This year's programming included Basic Trustee Training and Advanced Trustee Training, held April 6, before the official start of the conference. Sixty-five people signed up for basic and advanced training.
The conference began with registration on April 7 and a pre-conference workshop aimed at helping member trustees run their board meetings. A golf tournament was to be held that morning. However, severe weather forced the golf course to cancel the competition.
The opening ceremony was held April 8, during which TEXPERS President Paul Brown presented Robert Massengale a plaque honoring him for his service to the Pension Review Board, a state agency that oversees state and local public retirement systems in Texas. Massengale served on the board from 2009 until this year. In an acceptance speech, Massengale thanked TEXPERS for its commitment to securing retirement for public employees such as dedicated police officers, firefighters and municipal workers.
The opening ceremony also featured a keynote presentation by Brian Singer, head of the Dynamic Allocation Strategies Team at global investment banking and asset management firm William Blair. Singer highlighted what investors should do as a quantitative easing of large-scale asset purchases unwinds. William Blair was a Gold Keynote sponsor of the conference.

On April 9, David Webber, author of The Rise of the Working Class Shareholder and co-teacher of the Pensions and Capital Stewardship course for the Harvard Trade Union program at Harvard Law School, discussed his book during a session. He also was on hand to sign a limited number of free copies of his book provided to conference attendees.

Closing the conference, TEXPERS hosted former Pension Review Board chairman Josh McGee for a question and answer session. McGee, who was appointed by Gov. Greg Abbott to serve on the board, left the position to accept a job out of Texas. His term was to expire in 2021. McGee is an economist and a senior fellow at the Manhattan Institute. He formerly worked for the Laura and John Arnold Foundation, an organization critical of defined-benefit pensions. McGee has written extensively about retirement plan design, benefit security, and sustainability.

Gracie Flores, the plan administrator of the Corpus Christi Firefighters' Retirement System, has attended the TEXPERS Annual Conference every year for the last 19 years. Among the topic sessions she sat in during this year's conference was one discussing legal protections resulting in an appeal to the Texas Supreme Court, Eddington v. Dallas Police and Fire Pension System, which affirmed a court of appeal judgment holding that the pension system did not violate state law by amending its pension plan to reduce the interest rate paid on deferred retirement option plan accounts.

“I really found the panel discussing the Dallas issues interesting and helpful when discussing their process and means for a solution,” Flores says.
She feels it is important to attend the conference because of its educational offerings but adds that the conference's networking opportunities also allow her to share ideas, discuss issues, explore different retirement scenarios and offer possible solutions to pension concerns with industry colleagues.

TEXPERS is already preparing to host its annual Educational Forum, to be held Aug. 18-20 in Frisco, Texas. Registration is opening soon. Visit www.texpers.org to learn more.

The forum is held in August each year and provides another avenue for trustees and administrators of public pension funds to boost their knowledge of plan management techniques.