Public pensions made it through Texas' 85th legislative session relatively unscathed, but that wasn't for lack of trying on the part of legislators. TEXPERS tracked 27 bills related to public pensions and retirement during the session, which ended May 29. The association opposed 12 bills and supported one. TEXPERS took a neutral stance on the remaining bills. 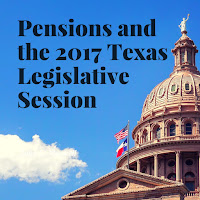 By Allen Jones
TEXPERS Communications Manager
Public pensions made it through Texas' 85th legislative session relatively unscathed, but that wasn't for lack of trying on the part of legislators. TEXPERS tracked 27 bills related to public pensions and retirement during the session, which ended May 29. The association opposed 12 bills and supported one. TEXPERS took a neutral stance on the remaining bills.
Among those opposed by TEXPERS were two firmly pushed bills, Senate Bill 509 by Sen. Joan Huffman, R-Houston, and House Bill 2434 by Rep. Dan Flynn, R-Canton. Neither bill passed but both would have created unfunded mandates for pension systems.
Huffman's bill would have required certain public pensions systems to evaluate investments in a report separate from those the systems already provide the state's Pension Review Board. The proposed legislation did not offer any state funding assistance to pension systems. Flynn's bill would have required certain funds to adopt a funding plan to achieve actuarial soundness. Not only would the legislation have required pensions systems to take on additional costs, but it would also have moved the Pension Review Board from an oversight agency to a statutory authority.
“Moving forward, it is incumbent upon all plans to attempt to address the issues raised by these two bills otherwise they are likely to reappear in the next session,” says TEXPERS Executive Director Max Patterson.
Other bills that were successfully opposed included legislation that would have limited the amount of annuity for basic pay of members of the armed forces, limited the ability of municipalities to raise funds for pension shortfalls, given cities the authority to approve or reject ordinances or resolutions regarding their pension funds, and moved the Employees Retirement System of Texas and Teacher Retirement System of Texas to defined contribution plans.
During the session, the legislature also addressed pension funding issues in Houston and Dallas, which were both local issues. Patterson hopes those funds will improve upon their problems and will not reappear in the next session in 2019.
An opposed bill that did manage to pass was known as the University Park bill. House Bill 3056, authored by Rep. Morgan Meyer, R-Dallas, and Flynn, is intended to replace the City of University Park's 76-year-old pension system. The bill achieves that by amending the firefighters' pension so it can place all of the fire department's new hires in the Texas Municipal Retirement System. The amendment goes into effect Sept. 1. Although wording narrowed the exclusion to “municipalities with populations less than 200,000, in counties with a population not less than 2 million and not more than 4 million,” the concern is the trend could spread.
“Hopefully that will remain unique to University Park and not have a ripple effect on the other small plans,” Patterson said.
The lone bill supported involved the creation of a statewide retirement program for Texas workers who do not have access to employer-sponsored 401(k) investment plans. The legislation, House Bill 3601 authored by Rep. Roberto Alonzo, D-Dallas, stalled in the House's Pensions Committee. (See a related article below).
TEXPERS previously published a recap of the legislative session on its blog. Op-eds from Patterson and TEXPERS' board president, Paul Brown, regarding the session can also be found in “TEXPERS Pension Observer,” the association's membership magazine. A digital edition of the magazine is available on the online.
The work of TEXPERS' Legislative Committee and its Legislative Subcommittee in reviewing bills was extremely helpful and very much appreciated, Patterson says.
“Ways to improve the process will be ongoing with every effort to look for improvements,” he added.

Author Bio: Allen Jones is the communications and public relations manager for TEXPERS. He has a bachelor's degree in Journalism and Communications. He is a former community journalist and editor. He previously worked for the Houston Community Newspapers group and Hibu and was a freelance writer for the Houston Chronicle.