The funded status of local public pension plans is growing closer to that of state funds, according to a new national study by the Center for Retirement Research at Boston College. The same is true of many local plans in Texas, and the outperformance could be due to those systems receiving more of their required contributions and using more rigid funding methods than their state counterparts. 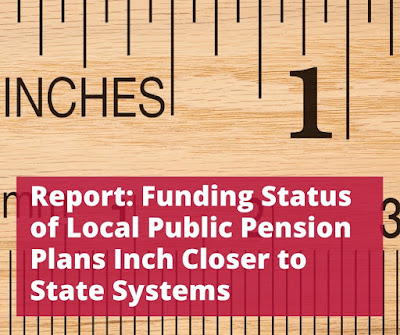 By Allen Jones
TEXPERS Communications Manager
The funding status of a public pension plan consists of the fund's accumulated assets that have been set aside for the payment of retirement benefits to employees. Since 2001, the aggregate funded status of local pension plans across the United States has lagged behind state plans. However, local public pension funds are gaining ground, says Jean-Pierre Aubry, associate director of state and local research at the center, and co-author of the funded status report.
The center released the report this month. Aubry spoke to TEXPERS about the report's findings.

During the early 2000s, state and local plans were overfunded in aggregate, based on traditional Governmental Accounting Standards Board measurements, Aubry says. Two financial crisis changed that. Local funding levels declined more sharply than that of states, though. Since 2012, however, the gap between state and local funding has been shrinking.
“The funded status of local plans decreased modestly from 67 to 69.9 percent,” Aubry says. “The funded status of state plans remained essentially level between 73.3 and 73.9 percent.”

He offers two reasons why the funded status gap between state and local pension plans are “inching closer.”

The report uses the most recent data available – from 2015 and 2016 – to update the center's prior assessments of the funding status of local plans. Researchers obtained data from 130 large local plans located across the United States. Data from several local plans in Texas were among those sampled for the study. Researchers compared the local data to those of 114 state plans. According to the report, data for all state plans and 55 of the local plans come from the Public Plans Database. Researchers collected the data for the other 75 plans separately.
Before 2012, although local plans received more of their actuarially required contributions and tended to set more stringent required contributions, poor investment returns historically limited their ability to close the gap with states, Aubry says. In recent years, however, local plans have experienced stronger returns than state plans, shrinking the funding gap between the two.

Eleven local plans in Texas were among the nationwide local public pension systems the center's researchers examined for the report. Of the Lone Star State's local plans, the City of Austin Fire Fighters' Relief and Retirement Fund had the highest funded ratio of 88.3 percent. Among those 11 Texas systems included in the study, Dallas Police and Fire had the lowest funded rate, 49.4 percent.
In Texas, the legislature has worked to shore up the state systems with significant additional contributions in the last few legislative sessions, says Joe Gimenez III, owner of G3 Public Relations and TEXPERS' public affairs consultant. He recently reviewed the Center for Retirement Research's funded status report for TEXPERS. Local governments, whose public employees are closer to the electoral process, can hold local elected officials more accountable, too, he says.

“TEXPERS has not looked at aggregate funded status comparison trends since 2001, but we can say that, according to the latest Pension Review Board report, only one statewide system (Judicial Retirement System of Texas) is among the top 10 in a best-funded ratio comparison,” Gimenez says. “The larger Texas County and District Retirement System and Texas Municipal Retirement System are among the top 15. It's hard to agree that, in Texas, local pension funds have lagged the state plans.”
And contrary to the Center for Retirement Research's report, TEXPERS' annual asset allocation study shows that Texas plans are more likely to use alternative strategy investments.
“The largest statewide respondents to TEXPERS' survey, the Texas Employees Retirement System, allocated 26.5 percent to alternative strategies,” Gimenez says. “The other statewide respondent, the Texas Emergency Services Retirement System, did not allocate any money to alternative strategies. The aggregate allocation of all Texas system to alternative investment was 27 percent in 2016. An investment return comparison is not available from current TEXPERS data.”
The Texas Pension Review Board ranks systems by amortization periods instead of funded ratios. Only one statewide system, TCDRS, is among the top 25 systems with the best amortization periods, Gimenez says.
“All systems face funding challenges,” he adds. “Politicians seem to favor corporate subsidies or other special projects, which raise their name recognition with voters. The funding of pensions is not valued like it should be. As Hurricane Harvey demonstrated, the value of public employees to disaster response and then rebuilding efforts is instrumental to civic order and structuring. The competition among public choice options for budget expenditures rarely ranks employee pension in their appropriate position to function of civil society.”

Because the Center for Retirement Research's brief is based on aggregate data and is not specific to Texas plans, the head of the state agency that oversees the actuarial soundness of Texas' state and local public pension retirement systems couldn't comment. The agency uses amortization period as one of the key metrics to review plan health, says Anumeha Kumar, executive director of the Texas Pension Review Board. However, it is not the only metric the agency looks at, she adds.

The PRB is currently conducting system actuarial reviews and has identified eight factors including amortization period, funded ratio, unfunded actuarial accrued liability as a percent of payroll, and actual contribution as a percent of actuarially determined contrition (ADC) to prioritize plans for in-depth reviews. ADC is a concept similar to the actuarially required contribution that was used under Governmental Accounting Standards Board principles.

“The brief also states that ‘more research is needed to fully understand this recent reversal' in the shrinking funding gap between local and state systems,” she says. “Unfortunately, we have not studied this trend of data for Texas plans so I would not be able to make any quantitative comments on or provide a Texas perspective relative to this report.”

An Overview of Public Pension Plans
In 2016, there were 6,276 state and local pension plans. The plans had an estimate of more than $3.7 trillion in assets and 31.2 million members. Of those plans, 5,977 were locally administered with $684 billion in assets and 3.8 million members. Local plans, make up the majority of plans even though the majority of assets and plan members are in state-run plans, says Jean-Pierre Aubry, associate director of state and local research at the Center for Retirement Research at Boston College. Aubry recently co-wrote a study indicating the funding status of local public pension plans are inching closer to state public pension systems.