Legislation seeking to establish a statewide 401(k) retirement plan for private-sector workers who do not have access to retirement benefits through their employers failed to make it into law this legislative session. That doesn't mean the idea has been K.O.-ed.
The legislation was among 27 pensions and retirement related bills tracked by TEXPERS during Texas' 85th legislative session. It also was the only bill to receive the association's backing. 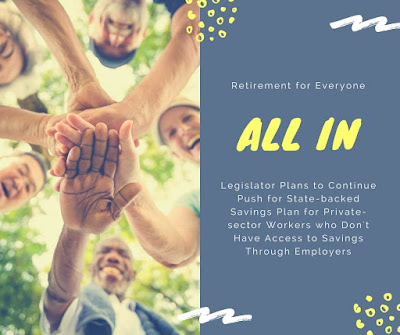 By Allen Jones
TEXPERS Communications Manager
Legislation seeking to establish a statewide 401(k) retirement plan for private-sector workers who do not have access to retirement benefits through their employers failed to make it into law this legislative session. That doesn't mean the idea has been K.O.-ed.
The legislation was among 27 pensions and retirement related bills tracked by TEXPERS during Texas' 85th legislative session. It also was the only bill to receive the association's backing.
Authored by Rep. Roberto Alonzo, D-Dallas, House Bill 3601 died without having received a single vote. When the legislative session ended May 29, the bill was left pending action in the state's House Pensions Committee, preventing it from progressing to the full House for a vote.
Establishing the state retirement pool may have failed to gain traction this year, but for Alonzo, authoring the bill was merely a first step to help secure retirement for millions of full-time working Texans who do not have access to retirement savings. The state's regular legislative session may be over, but he intends to keep building support for the plan until he can refile it during the state's next legislative session in 2019.

“Sometimes it takes several sessions to get a bill across the finish line,” Alonzo says.

The Dallas representative has been in office since November 1992. His constituency re-elected him in January. Alonzo spent many years focusing on securing defined benefit pensions for public employees. During the recent legislative session, he served as vice chairman of the House Pensions Committee. He was named Legislator of the Year in 2015 by the Texas Public Employees Association, a legislative advocacy organization for state government employees and retirees. He also took a leadership role in addressing the unfunded liabilities of the Employees Retirement System pension fund.
Alonzo says he will run for reelection in 2019 and is confident he will retain his seat in the House. Securing retirement for public and private-sector workers is at the top of his agenda.
Before becoming a lawyer and later running his first campaign for office in 1992, he grew up on a family farm in Crystal City, Texas. The seat of Zavala County, Crystal City was settled as a farming and ranching community was once referred to as the “Spinach Capital of the World.” Growing up, Alonzo says he never thought about a pension or retirement while working his family's farm.

“Our pension was having a big family,” he says. “We took care of each other. I'm 60 years old now. I'm grown up; I'm an attorney and a legislator. I see the benefit of pensions. I see how the government can be a part of it by ensuring those who've contributed to society have some savings when they retire.”

Alonzo's retirement bill received the support of TEXPERS, says its executive director, Max Patterson, because it would be an opportunity to see all working Texans start planning for their golden years.
Many critics want to compare public workers having a defined benefit plan when private-sector workers only have 401(k)s, Patterson says, but a state pool would level the playing field. Plus, he says, a statewide 401(k) would be voluntary as those workers would have the option of opting out of the plan.

“Numerous states have moved in this direction, and now it's time for Texas to come on board,” Patterson says.


In July, Oregon became the first state to launch a retirement savings program for employees whose employers don't provide one. California, Connecticut, Illinois, and Maryland also gained legislative approval to establish similar programs. According to a July 10 report in “Pensions & Investments” magazine, 24 other states are considering a similar idea and legislators are keeping an eye out on the challenges faced by states that have already enacted the investment programs.
More than 30 million full-time, full-year private-sector workers between the ages of 18 and 64 do not have access to an employer-based retirement plan, according to data provided in a 2016 report published by The PEW Charitable Trusts. That means that nationwide, only 58 percent of workers had access to a workplace retirement plan. And the study indicates that among those, 49 percent of workers were not participating in a plan. The percentage is worse in Texas. Only 50 percent of its workers have access to retirement, according to the PEW report.
Under Alonzo's proposed plan, the Texas program would be managed by the state and offer conservative investment options. He says enacting a pooled plan would stabilize contributions and equalize investment risk while providing for a lifetime of retirement income for Texans.
Current studies indicate a significant number of Americans are struggling financially and are not saving for retirement. Investment experts believe state programs like Alonzo's proposal could encourage retirement savings.
Rachel Schneider is senior vice president of the Center for Financial Services Innovation, an organization dedicated to improving the financial health of Americans. She says Alonzo's proposal is precisely what states should be doing to help people better prepare for life after work.
She recently co-authored “The Financial Diaries: How American Families Cope in a World of Uncertainty.” The book is the result of a lengthy research study into why a large portion of Americans feel financially insecure. In the book, Schneider and her co-author, Johnathan Morduch, found that 65 percent of households in the study sample had a savings account, but only 8 percent of them saved at least as much as their perceived need. Schneider says households were saving money, but not for long-term needs, especially not retirement.

“On average, 72 percent of their savings was intended for needs that had to be met within the next six months,” she says. “Eighty-three percent would be spent within a year. Only 10 percent was for needs three or more years away.”

In addition, the book's authors say those workers with access to 401(k)s are taking on too much risk as private investors. It is a risk employers should be shouldering if states cannot enact retirement programs.

“Achieving this will require a mix of legislation, regulation, collective action, and recognition by businesses that worker and consumer protections are in their corporate self-interest,” she says.

She likes what Texas and other states are trying to do for private-sector workers, but says more needs to be done, such as urging financial service companies to create savings programs that enable people to make good choices so the shift within the investment market is less worrisome.

She hopes lawmakers and companies will use her research to understand why so many Americans are feeling financially insecure. Understanding that she says will help create stable earnings which will then enable people to save for lives outside the workforce.

Author Bio: Allen Jones is the communications and public relations manager for TEXPERS. He has a bachelor's degree in Journalism and Communications. He is a former community journalist and editor. He previously worked for the Houston Community Newspapers group and Hibu and was a freelance writer for the Houston Chronicle.